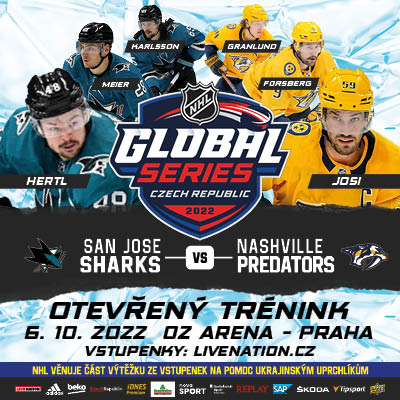 As part of the 2022 NHL Global Series, the National Hockey League (NHL), the National Hockey League Players Association (NHLPA) and Live Nation today announced the 2022 NHL Global Series Fan Day, a special opportunity for fans to attend practice sessions for the Nashville Predators and San Jose Sharks. on Thursday, October 6 from 15:00 to 17:30 at the O2 Arena in Prague, i.e. the day before the opening game of the 2022-23 season between the Predators and the Sharks.

In April, the NHL, NHLPA and Live Nation Sweden announced that the Predators and Sharks, along with the Columbus Blue Jackets and Colorado Avalanche, will participate in the 2022 NHL Global Series. The Sharks and Predators will open the 2022-23 regular season with a matchup in Prague at the O2 Arena on Friday, 7 . October and on Saturday, October 8. The Avalanche and Blue Jackets will square off in a pair of regular season games at Finland’s Nokia Arena in Tampere on Friday, November 4th and Saturday, November 5th.
Prior to the games in Prague, the Predators and Sharks will complete training camps in Europe and will each play an exhibition game as part of the 2022 NHL Global Series Challenge. The Predators will report to Bern, Switzerland and play an exhibition game against SC Bern at PostFinance Arena on Monday, October 3 . The Sharks will report to Berlin, Germany for an exhibition game against Eisbären Berlin at the Mercedes-Benz Arena on Tuesday, October 4th.

The start of ticket sales for Predators and Sharks training sessions was set for September 8 at 10:00 CEST on the Ticketportal network.

The 2022 NHL Global Series will mark the ninth season overall that the NHL has traveled to Europe to play regular season games and the first time since 2019. These games reward the legions of loyal and passionate fans in Europe who enjoy the live streaming of NHL games available through international broadcast and media partners. The NHL’s biggest stars are also featured on multiple social media platforms and on NHL.com in eight languages ​​for the league’s international fans. 28 regular season NHL games were played in Europe. So far, five games of the regular season of the NHL have taken place in the Czech Republic, all of which took place in Prague’s O2 arena. This year’s games in Finland will be the first ever NHL regular season games to be played in Tampere. A complete list of NHL regular season games played outside of North America can be found here.

The NHL is a global league – 29% of NHL players in the 2021-22 season were born outside of North America. All four clubs have a number of foreign stars on their rosters, including natives of the countries they host. In October, Roman Josi and Nino Niederreiter of the Predators will play in their native Switzerland. Czech natives Tomáš Hertl and Radim Šimek from the Sharks team will play in their homeland for the first time as NHL players. In addition, the Blue Jackets and Avalanche games in Finland will feature Mikko Rantanen and Artturi Lehkonen of the Avalanche, as well as Tampere natives Patrik Laine and Joonas Korpisalo of the Blue Jackets and Blue Jackets general manager Jarmo Kekalainen.