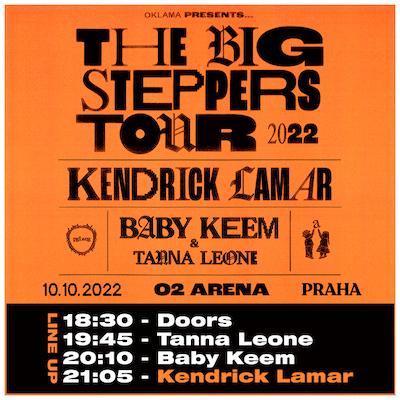 DARA ROLINS “50” – THE BIGGEST CONCERT OF MY LIFE

World rap star Kendrick Lamar back in the Czech Republic! The star artist is embarking on a massive The Big Steppers Tour, where he will present his latest album Mr. Morale & The Big Steppers, which was released today.

Thirty-four-year-old Kendrick Lamar Duckworth, a native of Compton, California, is arguably the most influential rapper, music producer and songwriter of our time. In terms of importance, he can perhaps only be compared to artists such as Bob Dylan and Miles Davis. He has released commercially successful albums with sharp social commentary, echoes of modern jazz, funk and soul, and imaginative music videos.

He has won 14 Grammy awards and a host of other awards( American Music awards, Billboard music awards, MTV awards, Pulitzer prizes, etc.) and has sold over seventy million copies of his albums, all of which have been certified platinum. Today he releases his eagerly awaited fifth solo album, Mr. Morale & the Big Steppers.

ABOUT AMAZON MUSIC: Amazon Music reimagines music listening by enabling customers to unlock millions of songs and thousands of curated playlists and stations with their voice. Amazon Music provides unlimited access to new releases and classic hits across iOS and Android mobile devices, PC, Mac, Echo, and Alexa-enabled devices including Fire TV and more. With Amazon Music, Prime members have access to ad-free listening of 2 million songs at no additional cost to their membership. Listeners can also enjoy the premium subscription service, Amazon Music Unlimited, which provides access to more than 90 million songs and the latest new releases. Amazon Music Unlimited customers also now have access to the highest-quality listening experience available, with more than 90 million songs available in High Definition (HD), more than 7 million songs in Ultra HD, and a growing catalog of spatial audio. Customers also have free access to an ad-supported selection of top playlists and stations on Amazon Music. All Amazon Music tiers now offer a wide selection of podcasts at no additional cost, and live streaming in partnership with Twitch. Engaging with music and culture has never been more natural, simple, and fun. For more information, visit amazonmusic.com or download the Amazon Music app.