Violin virtuoso and entertainer André Rieu for the fifth time in Prague. He will bring a completely new show to O2 arena in 2018 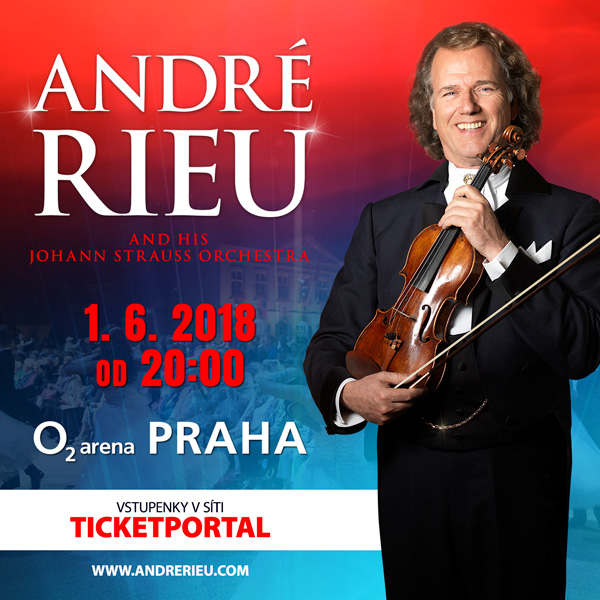 Témata:
Amusing colourful show, extraordinary musical repertoire from the world classics to musical melodies and modern pop-rock songs, humour that reminds you of a popular stand-up comedian. This is the concert of André Rieu, the Dutch violinist, who will perform on the 1st of June, 2018 in Prague O2 arena again. This May he sold out our music-hall, and next year he will return to Prague for the fifth time with new exciting repertoire.

André Rieu proves that classical music concert is not boring at all. Wide audience has enjoyed this artist for 30 years now, and his world tours alternate each other. The violin virtuoso, who is rightly called the “King of Waltz”, sells out concert-halls from across the globe. Ten million fans on all continents have seen his show so far. André Rieu performed in front of the Czech audience in May 2014 for the first time, and right away totally thrilled the packed Prague O2 arena. Since then, he has been returning here regularly every year.

“Prague is one of the most beautiful cities I have been to. The architecture, the history and the beauty are outstanding. And of course the Czech audience is simply wonderful and so warm hearted. I am very happy to see the fans showing their enthusiasm. Czechs really love music and I think there are not many countries that have such a rich folklore tradition. Beautiful dances, costumes, and of course a lot of magnificent music and fantastic composers like Antonín Dvořák – Czechs can be very proud,” says André Rieu.

Before Rieu’s concert in Prague on the 1st of June 2018, the famous violinist will perform in front of his 200,000 fans in a number of countries, from Chile through Mexico, from the United States to the United Kingdom. And the audience can look forward to a stirring evening with selections from renowned operas, rock and pop songs, musical and film melodies, and naturally classic waltzes. Of course, the Dutch violin magician will prepare a number of surprises and novelties too. The power of experiencing such a concert enhances indisputably Rieu’s own Johann Straus Orchestra which is composed of five dozen musicians from ten nations, and is the world’s biggest private orchestra.

André Rieu is a true phenomenon in the world of classical music. His Facebook fans are counted in millions. His videos on Youtube have over 300 million views. He has sold 40 million albums that are regularly ranked in the top 5 of the UK charts; he topped the world charts 30 times. Also, he is the holder of three prestigious Brit-Awards for the “Album of the year”.

Tickets sale – pricing from CZK 1,990 – starts on the 15th of September at 9 a.m. at the Ticketportal sales network at www.ticketportal.cz . Additionally, holders of the Platinum ticket priced at CZK 3,990 can look forward to the CD “André Rieu Stars” which they will receive after entering the O2 arena on the day of the concert.